Recently, I received an email from an Indian friend saying, “I just became a criminal". This incident happened a day after International Human Rights Day, when the Supreme Court (SC) of India, in Suresh Kumar vs Naz Foundation, upheld a law dating back to the colonial era that criminalised homosexuality.
In 2009, the Delhi High Court declared Section 377 of the Indian Penal Code (IPC), which criminalised consensual homosexual acts between adults, to be in violation of constitutional provisions. It opined that criminalisation “of homosexuality condemns in perpetuity a sizable section of society and force them to live their lives in the shadow of harassment, exploitation, humiliation, cruel and degrading treatments at the hands of the law enforcement machinery."

The judgment was overwhelmingly welcomed. However, the said decision was challenged at the SC, prompting the recent decision that upheld the illegality of homosexuality, outraging and disappointing many activists and the Lesbian, Gay, Bisexual, Transgender and Intersex (LGBTI) community.
As Section 377 of the IPC penalises ‘unnatural sex', the Naz Foundation’s argument was based on three premises. First, that the said provision was based on traditional Judeo-Christian morals and ethical standards which regard sex on purely functional terms. As such, the said provision could not be justified in contemporary Indian society, where minorities enjoy different forms of privilege under the law. Naz Foundation depended heavily on the 172th report of the Law Commission, which had recommended deleting Section 377 on the grounds that it was a hindrance to public health and had a direct negative imp-act on the lives of homosexuals. Addit-ionally, the law commission report highlighted the fact that the said provision had become a weapon for the authorities to abuse sexual minorities with detention, harassment, forced sex and.

Second, it was argued that private consensual sexual relations were protected under the right to liberty, privacy and dignity. On that premise, it is wrong to presume that LGBTI persons are given special rights; rather, they seek equity. Finally, it was argued that the objective of Section 377 is to punish unnatural offences but it never intended to classify penile-vaginal sex as ‘natural’ and non-vaginal penetrative sexual acts as ‘unnatural'.
Morality has often been grounds for discrimination in society. In the Naz Foundation case, the appellant argued that there would be always reasonable restrictions over rights to sexual orientation. Such reasonable restrictions would be on the principle of morality and public health. On morality, it was pointed out that the question of what is moral and immoral should be left to the Parliament to decide. However, the controversial wording of “against the order of nature” was argued by the appellant to mean that each bodily organ has its natural function. Furthermore, it was argued that if the Delhi court decision was to be upheld, it would have detrimental effects in social structure and the institution of marriage and bizarrely, could tempt young people to indulge in homosexual activities.
Judicial activism in India has long become an important weapon in securing the rights of individuals. However, this judgment has surely disheartened many rights activists and the gay community. In last paragraph of the judgment, Justice Singhvi says that the court pronounced the correctness of the view taken by the Delhi High Court on the constitutional invalidity of Section 377. The court thus made it clear that legislature could consider the desirability and propriety of Section 377 and amend it accordingly. 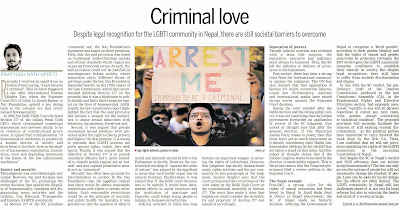 Separation of powers
Though judicial activism was initiated with a bona fide purpose, the legislative, executive and judiciary must always be balanced. Thus, the SC left the addition or deletion of provisions to the legislature.
Post-verdict, there has been a strong voice from the international community against the judgment. The UN has also claimed that that application of Section 377 would contravene international law. Furthermore, national and international media have raised strong voices against the Supreme Court decision.
Seeing the voter mindset after the Delhi election and the strong public outcry, it was not surprising that the Indian government forwarded an application of review of the SC judgment. One school of thought says that after the general election, if the Bharatiya Janata Party comes to power, then this issue won’t get as much importance as it should, considering their Hindu fundamentalist ideology. So far, the BJP has not taken a stand on this issue. Another school of thought claims that if the Indian Congress wants to succeed in the election, it needs public support. This is the prime reason why the Congress government filed a review petition to the Supreme Court.

The Nepal example
Post-2007, a strong voice for the rights of sexual minorities has been heard in Nepal. In Sunil Babu Pant & Others vs Nepal Government, the SC of Nepal made an historic decision, ordering the Government of Nepal to recognise a ‘third gender', according to their gender identity and that the rights of sexual and gender minorities be protected. Certainly the 2007 verdict gave the LGBTI community immense confidence to establish their identity in society. But despite legal recognition, they still have to suffer from societal discrimination and stigma.
In line with the SC verdict, the preliminary draft of the Interim Constitution, produced by the last Constituent Assembly (CA), in the Fundamental Rights and Directive Principles section, had expressly mentioned “equality to any and all persons regardless of colour, sex, race, caste, tribe, gender, sexual orientation or biological condition". The proposed provision will certainly facilitate the removal of still existing societal discrimination, as the political parties have committed to carry forward the work done by the first CA. Thus, I am confident that we will see provisions upholding the rights of the LGBTI community in the upcoming Constitution of Nepal.
But despite the SC of Nepal’s verdict and NGO advocacy, does our society accept homosexuality? The law can only govern the actions of people but will not necessarily change the mindset of people. Laws can be tools for social change but the effects are often limited. The LGBTI community in Nepal still has challenges ahead of it, not just for legal reforms but also in winning the hearts and mind of a society at large.