Intellectual property rights (IPR) refer to the legal rights owned by individuals and organisations on inventions, designs, goods and other creations produced by intellectual activity in the industrial, scientific and artistic fields. Nepal is in the midst of a political transaction, and with its low level of economic and social development, it has remained behind in the protection and enforcement of IPR. However, the major concern is an inadequate IPR legal framework.

Despite Nepal becoming a member of the World Trade Organization (WTO) on April 23, 2004 and subsequently accepting the obligations under Trade Related Aspects of Intellectual Property (TRIPS), the legal and policy framework is still confusing. Article 35 (11) of the Interim Constitution states, “The State shall pursue a policy of giving priority to the development of science and technology with a view to bringing about prosperity in the country, and shall also adopt a policy of giving due consideration to the development of local technology.” This provision gives the responsibility of making the necessary arrangements for the protection and promotion of intellectual property to the state. In addition, intellectual property also comes under the purview of freedom of speech and expression guaranteed by the Interim Constitution.

However, under the present IPR legal regime, we have two major pieces of legislation in Nepal: Patent, Design and Trademark Act 1965 and Copyright Act 2002. In addition to this, we have three ancillary legislations which are related to IPR. We do have a pending Intellectual Property Bill, but it is inadequate and lacking in several aspects. At the international level, Nepal is a signatory to 33 memberships including multilateral, bilateral and regional economic integration treaties. 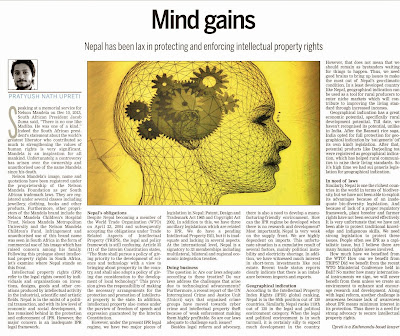 The question is: Are our laws adequate according to these treaties? Do our laws address the challenges that arise due to technological advancements? Furthermore, a recent report of the UN Interregional Crime and Justice Unit (Unicri) says that organised crime groups have moved towards cyber crime and intellectual property theft because of weak enforcement making them highly profitable. So are our laws adequate to challenge such issues?

Besides legal reform and advocacy, there is also a need to develop a manufacturing-friendly environment. How can the IPR regime be developed when there is no research and development? Most importantly, Nepal is very weak on the supply front. We are highly dependent on imports. This unfortunate situation is a cumulative result of several factors, mainly political instability and electricity shortage. In addition, we have witnessed much interest in short-term investments like real estate. Recent trade status reports clearly indicate that there is an imbalance between imports and exports.

According to the Intellectual Property Index Rights (IPIR) global ranking, Nepal is in the 95th position out of 130 countries. Similarly, Nepal ranks 113th out of 130 in the legal and political environment category. When the legal and political environment is in such turmoil, it is certainly silly to expect much development in the country. However, that does not mean that we should remain as bystanders waiting for things to happen. Thus, we need good brains to bring up issues to make the most out of Nepal’s geo-climatic condition. In a least developed country like Nepal, geographical indication can be used as a tool for rural producers to enter niche markets which will contribute to improving the living standard through increased incomes.

In need of laws

Similarly, Nepal is one the richest countries in the world in terms of biodiversity, but we have not been able to exploit its advantages because of an inadequate bio-diversity legislation. And because of lack of a proper regulatory framework, plant breeder and farmer rights have not been secured effectively. It is very unfortunate that we have not been able to protect traditional knowledge and indigenous skills. We need strong legislation to protect these issues. People often see IPR as a capitalistic issue, but I believe there are many human rights issues involved.

How much have we benefited from the WTO? How can we benefit from TRIPS? Did we benefit from the recent WTO Ministerial Conference held in Bali? No matter how many international instruments we sign, we will never benefit from them unless we create an environment to enhance and encourage research and development. Along with legal reform, another challenge is awareness because lack of awareness about IPR means minimum interest in its protection. Thus there is a need for strong advocacy to secure intellectual property rights.