EVIL ON THE LOOSE

February 14 is considered to be the biggest festival for lovers, but last Valentine's Day will be remembered for the barbaric act of a spurned suitor, Om Prakash Mehta, who threw acid on a 17-year-old girl. Many such gruesome and brutal acid attacks happen in Nepal, but they are not reported in the media and often remain unheard. This incident highlights two important things. First, the growing trend of youth not tolerating rejection by their lovers. Second, it gives us a preview of the social status of women in our society.

Among incidents of gender violence, acid attacks are the cruellest act of violence against women, as the victim suffers the severe impact of an attack that will remain for the rest of her life. Acid attacks are one of the most common forms of sexual violence in the world, but it's more prevalent in Southeast Asia. As far as Nepal is concerned, there is no concrete and reliable data about acid attacks. In most cases, they are reported under domestic violence. According to the Crime Investigation Department of Nepal Police, the number of cases of domestic violence surged from 1,355 in fiscal 2010-11 to 2,250 in fiscal 2011-12.

So what could be the motivating factors behind acid attacks? Acid is generally used as an easily available weapon to fulfil an act of revenge motivated by jealousy, anger or hatred because of a relationship problem such as unfaithfulness or rejection. Women are frequent targets of acid attacks which is indicative of the common practice of blaming them for any misfortune. In fact, sometimes women blame other women rather than pointing towards men. For example, a wife who discovers that her husband is having an affair is more likely to blame his mistress than becoming angry at him. This example shows the social conditioning in which we have been brought up. There are also male victims of acid attacks, but they are very few in number. It would be very wrong to consider it as a female problem alone as it's common to both men and women. A drop of acid does not know a person's sex, it only knows only how to burn and damage. So measures to control acid attacks are equally important for both sexes.

Under Nepal's legal system, there is no specific penal provision for acid attacks which makes it difficult for the prosecution to build a strong case against the perpetrator. Under present laws, the perpetrator of an acid attack is booked under the provision of hurt and culpable homicide of Muluki Ain. Number 14 of the chapter Hurt, provides punishment for causing pain to the body by burning, branding, forceful rubbing or otherwise using fire, fire like burning materials or acid.

However, punishment varies depending on the severity of the injury to the victim. If the injury is not grievous, the punishment is a fine of Rs 500 and two months' imprisonment. In case the victim's front part of the body, face or ear
has not been burnt, the punishment is a Rs 1,000 fine and four months' jail. The fine is Rs 2,000 for burning the nose or eyes. This makes it very clear that the present legal measure is insufficient to prevent acid attacks. In the absence of specific provisions, offenders are prosecuted under homicide. 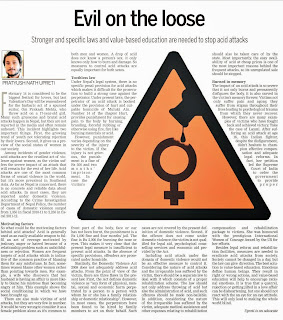 Similarly, the Domestic Violence Act 2009 does not adequately address acid attacks. From the point of view of the victim, there are three flaws in the present law. First, the Act defines domestic violence as “any form of physical, mental, sexual and economic harm perpetrated by a person to a person with whom he or she has a family relationship or domestic relationship”. However, in most cases, the perpetrators have been found to be hired by family members to act on their behalf. Such cases are not covered by the present definition of domestic violence. Second, if the offence does not come under domestic violence; the victim is not qualified for legal aid, psychological counselling services and economic aid provided by the Act.

Including acid attack under the domain of domestic violence would not be an effective measure to control it. Considering the nature of acid attacks and the irreparable loss suffered by the victim, there should be a separate law to deal with it which consists of a proper rehabilitation scheme. The law should not only address throwing of acid but also the administration of acid, and such offences should be made non-bailable. In addition, considering the nature of the irreparable loss suffered by the victim, adequate medical assistance and other expenses relating to rehabilitation should also be taken care of by the state. Most importantly, the easy availability of acid at cheap prices is one of the most important reasons behind the frequent attacks, so its unregulated sale should be stopped.

The impact of an acid attack is so severe that it not only burns and permanently disfigures the body, it is also carved in the victim's memory forever. Victims not only suffer pain and agony, they suffer from stigma throughout their lives leading to psychological trauma from which they never recover. However, there are many examples of victims who have fought back and achieved victory. Take the case of Laxmi. After suffering an acid attack at age 16, this Indian fighter, despite the disfigurement, didn't hesitate to champion effective compensation and adequate legal reforms. In fact, her petition led the Supreme Court of India to order the government to provide proper compensation and rehabilitation package to victims. She was honoured with the prestigious International Women of Courage Award by the US for her efforts.

Besides legal reform and rehabilitation facilities, measures are needed to eradicate acid attacks from society. Society cannot be changed in a day, but the law can give direction. The best solution is value-based education. Emotions define human beings. They result in right or wrong actions, and value-based education will help to encourage rational emotions. It is true that a quarrel, rejection or getting jilted in a love affair can be disheartening, but one should not react with the an eye for an eye attitude. This will only lead to making the whole world blind.