Two recent burn cases—of Rihana Sheikh and Chanda Salmani—have received serious attention in the media and have prompted civil society to raise their voices against such kinds of violence. Rihana, a victim of her own husband, has returned home after a 45-day treatment at Bir Hospital. Chanda, who was set on fire along with her three minor children by her brother-in-law, not only suffers from serious burn injuries but also went into trauma due to the demise of her two minor children. She too has returned home after a long stay at the Teaching Hospital.

Like with Rihana and Chanda, every other day, there are news reports of violence against women. Although such violence is not new to our society, in recent years, the rate of incidence, or reporting, has increased rapidly. According to the police’s Crime Investigation Department, in between the fiscal years 2011/12 and 2012/13, the number of rape cases increased from 555 to 677. Similarly, polygamy increased from 249 to 350 and child marriage increased from 12 to 19. Although women in Nepal face different types of violence, burn victims suffer from a great deal of pain and agony. Considering the nature of the injury and the ensuring physiological trauma, I consider burn violence to be among the worst forms of cruelty. In the last six months alone, there have been several such incidents. In May-June this year, there were more than six reported cases of burn violence. 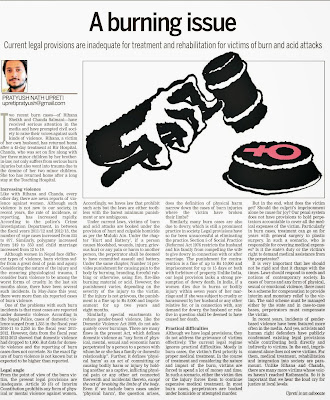 From the point of view of the burn victim, the present legal provisions are inadequate. Article 20 (3) of Interim Constitution prohibits any form of physical or mental violence against women. Accordingly, we haves law that prohibit such acts but the laws are either toothless with the barest minimum punishment or are ambiguous.

Under current laws, victims of burn and acid attacks are booked under the provision of hurt and culpable homicide as per the Muluki Ain. Under the chapter ‘Hurt and Battery’, if a person causes bloodshed, wounds, injury, grievous hurt or any pain or harm to another person, the perpetrator shall be deemed to have committed assault and battery. Under the same chapter, Number 14 provides punishment for causing pain to the body by burning, branding, forceful rubbing or otherwise, using fire, fire-like burning material or acid. However, the punishment varies, depending on the severity of the injury to the victim. If the injury is not grievous, the punishment is a fine up to Rs 8,000 and imprisonment for up two years and eight months.

Similarly, special enactments to reduce gender-based violence, like the Domestic Violence Act 2009, do not adequately cover burnings. There are many flaws in the present Act, which defines domestic violence as “any form of physical, mental, sexual and economic harm perpetrated by a person to a person with whom he or she has a family or domestic relationship”. Further, it defines ‘physical harm’ as an act of committing or causing bodily harm or injury by holding another as a captive, inflicting physical pain or any other act connected therewith and incidental thereto, except the act of breaking the limbs of the body. Even if we include burn cases under ‘physical harm’, the question arises, does the definition of physical harm narrow down the cases of burn injuries where the victim have broken their limbs?

Similarly, many burn cases are also due to dowry, which is still a prominent practice in society. Legal provisions have so far been unsuccessful at eliminating the practice. Section 5 of Social Practice (Reforms) Act 1976 restricts the husband and his family from compelling the wife to give dowry in connection with or after marriage. The punishment for contravention is a fine of up to Rs 10,000 and imprisonment for up to 15 days or both with forfeiture of property. Unlike India, our legal provision lacks a strong presumption of dowry death. In India, if a women dies due to burns or bodily injury within seven years of her marriage and if she was subject to cruelty or harassment by her husband or any other relative for, or in connection with, any demand for dowry, the husband or relative in question shall be deemed to have caused her death.

Although we have legal provisions, they do not address the grievance of victims effectively. The current legal regime ignores practical difficulties. Mostly in burn cases, the victim’s first priority is proper medical treatment. In the course of treatment and considering the nature and impact of the burn, victims are forced to spend a lot of money and time. In such a scenario, either the victim dies or the injury forces them to continue expensive medical treatment. In most burn cases, perpetrators are booked under homicide or attempted murder.

But in the end, what does the victim get? Should the culprit’s imprisonment alone be cause for joy? Our penal system does not have provisions to hold perpetrators accountable to cover all the medical expenses of the victim. Particularly in burn cases, treatment can go on for years with general surgery to plastic surgery. In such a scenario, who is responsible for covering medical expenses? Is it the state’s duty or the victim’s right to demand medical assistance from the perpetrator?

It is very important that law should not be rigid and that it change with the times. Laws should respond to needs and notions of contemporary society. In cases of burns and any form of physical, sexual or emotional violence, there must be a scheme for compensation to provide interim and monetary relief to the victim. The said scheme must be managed either by the state and in case-to-case bases, perpetrators must compensate the victim.

In recent years, incidents of gender-based violence have been featured more often in the media. And yes, activists and human right defenders have publicly condemned existing legal provisions while contributing both directly and indirectly to victims. In the end, imprisonment alone does not serve victims. For them, medical treatment, rehabilitation and integration into society are paramount. Unlike Rihana and Chanda, there are many more victims whose voices haven’t reached Kathmandu. So it is important that we hear the loud cry for justice at local levels.

Upreti is an advocate (upretipratyush@gmail.com)