I am a man but it is only my physical assets that make me different from a woman. Today, I’m ashamed of being a man. In this ‘patriarchy’, we seem to have lost our senses and are committing barbaric acts like the acid attack last Sunday on two young girls. But whenever I write on gender issues, I receive responses from readers. Among them, there was an email from an undergraduate student who said, “When issues regarding women victims are brought up by male writers, I feel that women are not alone in the fight against gender discrimination”. Indeed, for any form of gender violence, women are not alone, and such violence is not just an issue of sexism; it’s a social issue.

Last Sunday morning, Kathmandu witnessed a vicious acid attack on two minors who were waiting for their teacher at a tuition centre in Basantapur. Since the news of the incident became public, there has been a flood of sympathy and concerns for the victims. There have also been mass protests against this acid attack in Kathmandu. 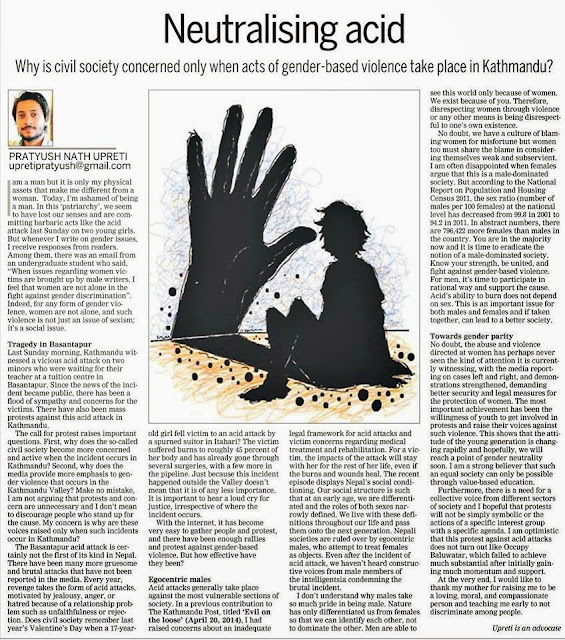 The call for protest raises important questions. First, why does the so-called civil society become more concerned and active when the incident occurs in Kathmandu? Second, why does the media provide more emphasis to gender violence that occurs in the Kathmandu Valley? Make no mistake, I am not arguing that protests and concern are unnecessary and I don’t mean to discourage people who stand up for the cause. My concern is why are these voices raised only when such incidents occur in Kathmandu?

The Basantapur acid attack is certainly not the first of its kind in Nepal. There have been many more gruesome and brutal attacks that have not been reported in the media. Every year, revenge takes the form of acid attacks, motivated by jealousy, anger, or hatred because of a relationship problem such as unfaithfulness or rejection. Does civil society remember last year’s Valentine’s Day when a 17-year-old girl fell victim to an acid attack by a spurned suitor in Itahari? The victim suffered burns to roughly 45 percent of her body and has already gone through several surgeries, with a few more in the pipeline. Just because this incident happened outside the Valley doesn’t mean that it is of any less importance. It is important to hear a loud cry for justice, irrespective of where the incident occurs. With the internet, it has become very easy to gather people and protest, and there have been enough rallies and protest against gender-based violence. But how effective have they been?

Acid attacks generally take place against the most vulnerable sections of society. In a previous contribution to The Kathmandu Post, titled ‘Evil on the loose’ (April 20, 2014), I had raised concerns about an inadequate legal framework for acid attacks and victim concerns regarding medical treatment and rehabilitation. For a victim, the impacts of the attack will stay with her for the rest of her life, even if the burns and wounds heal. The recent episode displays Nepal’s social conditioning. Our social structure is such that at an early age, we are differentiated and the roles of both sexes narrowly defined. We live with these definitions throughout our life and pass them onto the next generation. Nepali societies are ruled over by egocentric males, who attempt to treat females as objects. Even after the incident of acid attack, we haven’t heard constructive voices from male members of the intelligentsia condemning the brutal incident.

I don’t understand why males take so much pride in being male. Nature has only differentiated us from females so that we can identify each other, not to dominate the other. Men are able to see this world only because of women. We exist because of you. Therefore, disrespecting women through violence or any other means is being disrespectful to one’s own existence.

No doubt, we have a culture of blaming women for misfortune but women too must share the blame in considering themselves weak and subservient. I am often disappointed when females argue that this is a male-dominated society. But according to the National Report on Population and Housing Census 2011, the sex ratio (number of males per 100 females) at the national level has decreased from 99.8 in 2001 to 94.2 in 2011. In abstract numbers, there are 796,422 more females than males in the country. You are in the majority now and it is time to eradicate the notion of a male-dominated society. Know your strength, be united, and fight against gender-based violence. For men, it’s time to participate in rational way and support the cause. Acid’s ability to burn does not depend on sex. This is an important issue for both males and females and if taken together, can lead to a better society.

No doubt, the abuse and violence directed at women has perhaps never seen the kind of attention it is currently witnessing, with the media reporting on cases left and right, and demonstrations strengthened, demanding better security and legal measures for the protection of women. The most important achievement has been the willingness of youth to get involved in protests and raise their voices against such violence. This shows that the attitude of the young generation is changing rapidly and hopefully, we will reach a point of gender neutrality soon. I am a strong believer that such an equal society can only be possible through value-based education.

Furthermore, there is a need for a collective voice from different sectors of society and I hopeful that protests will not be simply symbolic or the actions of a specific interest group with a specific agenda. I am optimistic that this protest against acid attacks does not turn out like Occupy Baluwatar, which failed to achieve much substantial after initially gaining much momentum and support.

At the very end, I would like to thank my mother for raising me to be a loving, moral, and compassionate person and teaching me early to not discriminate among people.