Every year, 26th April, is marked worldwide as World Intellectual Property Day to ‘promote discussion of the role of intellectual property (IP) in encouraging innovation and creativity’. This year, theme of world IP day 2015 is ‘Get up, stand up- for music’. In recent years the music industry has been facing serious problems of copyright infringement through digital media and increasing cross-border piracy.. Let’s examine where Nepal stand on Intellectual Property rights.

In my previous contribution to the post, titled “Mind gains” (February 2, 2014), I have analyzed overall status of Intellectual Property in Nepal. It’s very unfortunate to say that, not thing have changed than previous year. Nepal still lag far behind in protecting Intellectual creation. According to the International Property Rights Index (IPRI) 2014 global ranking, Nepal remains the weakest in protecting Intellectual property, by securing 78th Position out of 97 countries. Similarly, Nepal ranks 14th in the Asia out of 16th countries. Similarly, last ten years filling trend of intellectual property is also not encouraging. It shows, Intellectual Property has been very much ignored in Nepal. At present, there are two barriers to development. First, inadequate legal instrument and second, lack of awareness and expertise in the subject. At most, music industry has suffered a lot. 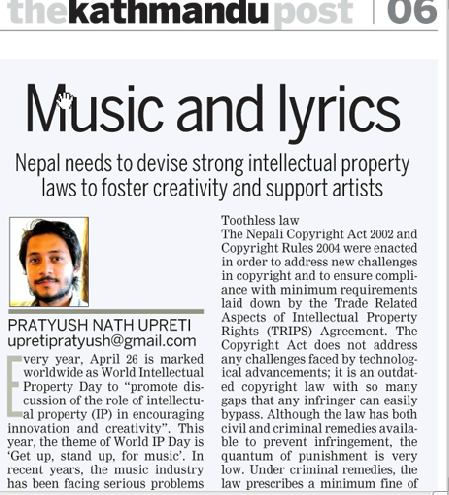 Historically, music has played a major role in democratization of culture and language and to a extend medium to communicate with people. For example, during Maoist insurgency, they used music to communicate with people and in a way seek their support. During the era, Maoist had their own FM station, where songs played to spreading the message of equality, rights and inclusiveness among others. It actually helped the moist to spread their agenda and also received support to some extent. Similarly, during Jan-Anadolan II, patriotic music was often played in rallies and protest show the unity among the people. Likewise, music has also helped the Indigenous community (Janjati) to advocate their rights and their cultural identities by playing music at several event to show that their language were part of Nepali culture. Therefore, music have played significant role in our society and it’s very important to create an environment where artist can get fruits of their labour and encourage creativity. When music is created, its not only singer, songwriter, musician, publishers, arranger and many others are involved in creativity. At the moment, music industry is suffering from rampant piracy.

Music industry in Nepal is small but growing. However, the hindrance of its growth is piracy. South East Asia is considered to be one of the pioneers in music piracy and Nepal is no exception to it. Unlike China, Nepal does not have cultural root of ‘copying’, but in recent years the copying and buying pirated songs/music have been so habitual, that we prefer pirated. This habitual practice has severe impact not only on music industry but also to artist. In Nepal, an artist cannot imagine to live his life on sale of music. Their earning is mostly depends upon the music concert. Till recent years, piracy was witnessed through pirated CD/DVDs and portable medium like pen drive etc. The beauty of music industry is it’s changing music. Like taste of music has changed, similarly the medium where it is distributed and consumed has also changed. Recent Nepal Telecom data shows, 38.78 percentage of population have access to Internet. The Internet plays an important role in piracy, it gives platform like YouTube to share pirated music/ movie. The recent victim of such online piracy was ‘Kohinoor’ movie, which was pirated through uploading sites like, YouTube. These problems are well identified previously, but not much of measures of have taken my government to cope with copyright infringement.

Nepalese Copyright Act, 2002 and Copyright Rules, 2004 were enacted in order to address new challenges in copyright and to ensure compliance with minimum requirement laid down by the TRIPS Agreement. The Copyright Act does not address any challenges faced by technological advancements; it’s an outdated copyright law with so much gaps that any infringer can easily bypass. Although the law has both civil and criminal remedies available to prevent infringement, the quantum of punishment is very low. Under criminal remedies, THE law prescribes a minimum fine of Rs 10,000 up to Rs 100,000, six-month imprisonment, or both. It looks as though the copyright infringer does not have much to be afraid of. The law needs to be amended to address several issue of digital copyright. For example, the liability of Internet service provider upon failing to control infringement goods or knowingly providing forum for infringement. Enforcing copyright itself is challenging, and now with digital media, it had made more difficult. However, problem does not lies on legal remedy, the right holder must be aware of the situation and should act to curtail the infringement. Unfortunately, there are instances were right holder even after identifying the culprit, have let them go. Such acts certainly encourage piracy and perceptions of pirated use get more habitual.

No doubt, piracy is important issue to be addressed. The broader concerns, lies on overall development of Intellectual Property rights, which is very much overlooked by the government. Nepal lack’s laws on Geographical Indication, Plant variety/breeder’s rights, which would be tool for rural development. Due to lack of laws, the potential geographical indications like Iiame Chiyaa(IIam tea), Jumli marshi (rice from Jhumla), Nepali Kagaz(hand made paper) etc which is exported worth of millions in international market particularly, United States and Europe, is on verge of getting genericide. Considering the geo-climatic condition of Nepal, Geographical indication will act as a tool by which rural producer can enter into niche markets which will contribute to improving living condition through increased income. In addition, Nepal has also failed to protect traditional knowledge and indigenous skills.

Furthermore, political instability has discouraged research and development. Although Nepal hopes that bilateral investment promotion and protection agreement (BIPPA) would attract foreign investor. From IP aspects, only concern with such agreement is that the definition of investment includes Intellectual Property. Therefore, without proper IP Policy, such agreement gives burden to state. As IPRs are integral part of regulatory system including taxes, investment, regulations, trade policies. So, there is need of concrete national IP policy. Although intellectual property grows when there is more investment vis-a-vis research and development. But it cannot be ignored that small-scale industries are very much growing and are unaware of intellectual property, which would be used to protect their product from competitor as well as helps in branding the products.

Thus, current Intellectual Property situation of Nepal is very painful. The present laws are below the minimum standard and few aspects of IP are still not protected and existing enforcement is very weak, overall discouraging innovation and creativity. The fate of draft Intellectual Property Bill is unknown. Let’s hope this year, government comes with comprehensive IP Policy, which is of immediate need.

Upreti is an advocate
Email: upretipratyush@gmail.com
Note: This is extract of Article originally published in The Kathmandu Post, 26/04/2015 on occasion of World IP Day
Due to technical problem, article would not be accessed through online
Link to the article: at page 6.