One morning, while leaving home, I heard my neighbour complaining about the Indian blockade while she was using firewood to cook food for her children, who were dressed for school and awaiting food. One week after this incident, I visited Delhi for an academic conference where one of my Indian colleagues asked me if India was a good neighbour. I replied that good neighbours do not block borders and make a landlocked country suffer. He paused, and with a smile, asked if India is to blame for the political problems prevailing in Nepal. I replied that the problem is ours and the onus is on us to solve

the contentious issues, but as a neighbour, we expect India to be a mediator, not
the moderator.
During my visit to Delhi, I had quite a few conversations with Indian nationals regarding the current situation in Nepal. And from my discussions, I could see that Indians were still unable to comprehend the tragic breakdown of relationships between India and Nepal and the growing agony and disappointment of the Nepali people towards India. Many Indians were interested to know what exactly was happening in Nepal; I was often asked questions such as: who are the Madhesis? What is the role of China? Are you a Madhesi? 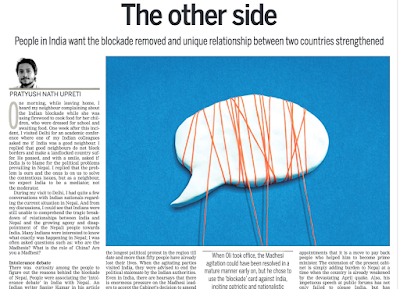 There was curiosity among the people to figure out the reasons behind the blockade of Nepal. People were associating the ‘intolerance debate’ in India with Nepal. An Indian writer Sanjay Kumar in his article ‘An uprising against intolerance in India,’ states that in India“the perception is gradually building that Modi is using the slogan of development merely as a mask and that the real agenda of his government is to convert the nation into a Hindu State.” So there is a perception among certain Indians that the Bharatiya Janta Party (BJP) wishes to reinstate India as a Hindu state, so its Hindu neighbour turning into a secular state was an immediate concern for it. This reading was not surprising to me because ever since BJP came to power in India, there were speculations in Nepal that it might be reinstated as a Hindu kingdom. Some Nepali people even think that the last moment inclusion of the definition of secularism in the constitution as “religious and cultural freedom and safeguarding the religious and traditions that have been followed since the Sanatan Dharma” was aimed to please India. But that did not happen.

The ongoing remonstration in the Tarai is the longest political protest in the region till date and more than fifty people have already lost their lives. When the agitating parties visited India, they were advised to end the political stalemate by the Indian authorities. Even in India, there are hearsays that there is enormous pressure on the Madhesi leaders to accept the Cabinet’s decision to amend the constitution. The Madhesi leaders seem to be aware that their demand regarding the demarcation of provinces, which is their bottom line, may not be easily settled.
But the Madhesi leaders are not accepting the proposal made by the major parties in regard to constitutional amendments mainly due to two reasons. First, majority of the Madhesi people support the ongoing movement and it has also received a lot of attention from the international community. Moreover, the Madhesi leaders, due past experience, are hesitant to resolve the issue with just an agreement and realise that this is the golden opportunity for them to incorporate their demands into the constitution. Secondly, the enormous expectations from the ground have made them reluctant to accept the demarcation proposal. In
addition, the Madhesi leaders never
expected that this turmoil will be stretched for this long and are aware that there is enormous pressure on India in front of the international community to resolve the dispute between the political parties in Nepal as India is being blamed for the blockade. Therefore, in reality the Madhesi leaders are now trapped.

Everyone that I met in India felt that Prime Minister KP Oli, to some extent, should be blamed for the current political crisis and they are not wrong to have felt this way. Oli’s lack of a clear vision to address the Madhesi issues along with untimely and unwanted political comments in the media has fueled the crisis. When he took office, the Madhesi agitation could have been resolved in a mature manner early on, but he chose to use the ‘blockade’ card against India, inciting patriotic and nationalistic sentiments. This has backfired with a thriving black market across the country, particularly in Kathmandu. Moreover, appointment of six deputy prime ministers has really disappointed people at large. It is evident from his appointments that it is a move to pay back people who helped him to become prime minister. The extension of the present cabinet is simply adding burden to Nepal at a time when the country is already weakened by the devastating April quake. Also, his impetuous speech at public forums has not only failed to please India, but has
given birth to a school of thought that the time has come for PM Oli to wind up his government. A recent speech by the UCPN (Maoist) leader Prachanda threatening to quit the government has strengthened such speculations.
The ambivalence of the government to address the agitation in the Madhes has worsened the ongoing political crisis. Neither has the government used international forums to speak against the Indian blockade, nor has it created a trustful environment to negotiate with the Madhesi leaders. During my short visit to India, I have realised that people in India want the blockade to be removed and the unique relationship between the two countries strengthened. In the end, people in Kathmandu and Madhes have suffered a lot in these past four months. The onus lies on the political leaders residing in Kathmandu and Madhes to end the political impasse and free the people of the misery that they have been forced to bear.