The theme of this year’s World Intellectual Property Day which falls on April 26 is ‘Innovation-Improving Lives’. According to Global Innovation Index 2016, Nepal is in the 115th position among 128 countries which shows that we are lagging behind in building an innovative society. Last year, Nepal witnessed several cases of online piracy which aroused strong protests from the movie industry. The most widely publicised case was that of the film Chhakka Panja which was illegally copied and posted on Facebook. The perpetrator eventually committed suicide. Another case was that of the film Chha Ekan Chha. The perpetrator was identified but no action was taken, leading newspapers to report that he had been forgiven. 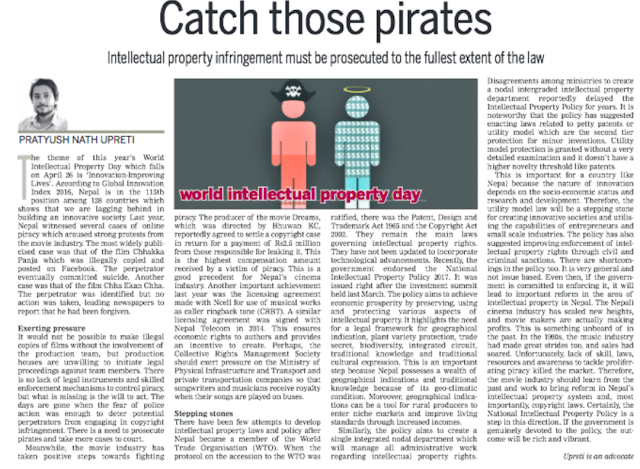 It would not be possible to make illegal copies of films without the involvement of the production team, but production houses are unwilling to initiate legal proceedings against team members. There is no lack of legal instruments and skilled enforcement mechanisms to control piracy, but what is missing is the will to act. The days are gone when the fear of police action was enough to deter potential perpetrators from engaging in copyright infringement. There is a need to prosecute pirates and take more cases to court.

Meanwhile, the movie industry has taken positive steps towards fighting piracy. The producer of the movie Dreams, which was directed by Bhuwan KC, reportedly agreed to settle a copyright case in return for a payment of Rs2.5 million from those responsible for leaking it. This is the highest compensation amount received by a victim of piracy. This is a good precedent for Nepal’s cinema industry. Another important achievement last year was the licensing agreement made with Ncell for use of musical works as caller ringback tone (CRBT). A similar licensing agreement was signed with Nepal Telecom in 2014. This ensures economic rights to authors and provides an incentive to create. Perhaps, the Collective Rights Management Society should exert pressure on the Ministry of Physical Infrastructure and Transport and private transportation companies so that songwriters and musicians receive royalty when their songs are played on buses.

There have been few attempts to develop intellectual property laws and policy after Nepal became a member of the World Trade Organisation (WTO). When the protocol on the accession to the WTO was ratified, there was the Patent, Design and Trademark Act 1965 and the Copyright Act 2002. They remain the main laws governing intellectual property rights. They have not been updated to incorporate technological advancements. Recently, the government endorsed the National Intellectual Property Policy 2017. It was issued right after the investment summit held last March. The policy aims to achieve economic prosperity by preserving, using and protecting various aspects of intellectual property. It highlights the need for a legal framework for geographical indication, plant variety protection, trade secret, biodiversity, integrated circuit, traditional knowledge and traditional cultural expression. This is an important step because Nepal possesses a wealth of geographical indications and traditional knowledge because of its geo-climatic condition. Moreover, geographical indications can be a tool for rural producers to enter niche markets and improve living standards through increased incomes.

Similarly, the policy aims to create a single integrated nodal department which will manage all administrative work regarding intellectual property rights. Disagreements among ministries to create a nodal intergraded intellectual property department reportedly delayed the Intellectual Property Policy for years. It is noteworthy that the policy has suggested enacting laws related to petty patents or utility model which are the second tier protection for minor inventions. Utility model protection is granted without a very detailed examination and it doesn’t have a higher novelty threshold like patents.

This is important for a country like Nepal because the nature of innovation depends on the socio-economic status and research and development. Therefore, the utility model law will be a stepping stone for creating innovative societies and utilising the capabilities of entrepreneurs and small scale industries. The policy has also suggested improving enforcement of intellectual property rights through civil and criminal sanctions. There are shortcomings in the policy too. It is very general and not issue based. Even then, if the government is committed to enforcing it, it will lead to important reform in the area of intellectual property in Nepal. The Nepali cinema industry has scaled new heights, and movie makers are actually making profits. This is something unheard of in the past. In the 1990s, the music industry had made great strides too, and sales had soared. Unfortunately, lack of skill, laws, resources and awareness to tackle proliferating piracy killed the market. Therefore, the movie industry should learn from the past and work to bring reform in Nepal’s intellectual property system and, most importantly, copyright laws. Certainly, the National Intellectual Property Policy is a step in this direction. If the government is genuinely devoted to the policy, the outcome will be rich and vibrant.