Hey, I made that.


Apr 29, 2018-World Intellectual Property Day was celebrated on April 26 under the theme ‘Powering Change: Women in Innovation and Creativity’. In general, gender disparities are visible in Nepal. In the music and film industry, there are more men than women. Nonetheless, the highest grossing Nepali film Chhakka Panja was directed by a woman, reminding us that women are no less innovative or creative than men. The existing legal framework provides limited incentives for women to encourage creativity and innovation. The Industrial Enterprises Act 2016 provides a 20 percent discount on the registration fee for enterprises owned by women. Similarly, the National IP Policy 2017 provides legal and administrative facilities.

Barriers to copyright enforcement In recent times, the Nepali film industry has been vocal about copyright infringement, and rightly so because unauthorised use of someone’s work should not be allowed, and strict action should be taken against violators. The online piracy of Chhakka Panja, Chha Ekan Chha and Dreams stirred the Nepali film industry. Bhuwan KC, the director of Dreams, reportedly settled the piracy dispute with a hefty compensation. This year, the Kri team was accused of copyright infringement for using Shambhu Pradhan’s work. The dispute was reportedly settled for a payment of Rs1.1 million. Surprisingly, Bhuwan KC, who has been demanding stronger copyright enforcement, criticised Shambhu Pradhan for demanding compensation. This episode shows the mindset of the Nepali film industry.

In most piracy cases, the music director or producer often claims the work to be original. However, the Copyright Act of 2002 leaves it to the court to determine the criteria for originality. Most copyright disputes do not go to court. Lack of awareness and flaws in the copyright law is the main reason. Under the Copyright Act, the author of the work cannot file a civil case in court against the perpetrator as the law considers copyright offences as state cases. However, civil remedies are available to the authors. This procedural burden is also one of the reasons why copyright cases are usually settled out of court.

Most of the times, authors are reluctant to press charges because they fear being isolated in the movie industry. This will hinder creativity and lead to more cases of piracy in the film industry. Performing cover songs and uploading them to YouTube has become a trend in Nepal. Most people upload the videos without the author’s permission. There is always the possibility of copyright infringement. The court has slapped heavy fines in copyright infringement cases related to cover songs. However, one cannot ignore the fact that these cover songs help authors to reach a wider audience and gain some sort of celebrity status. 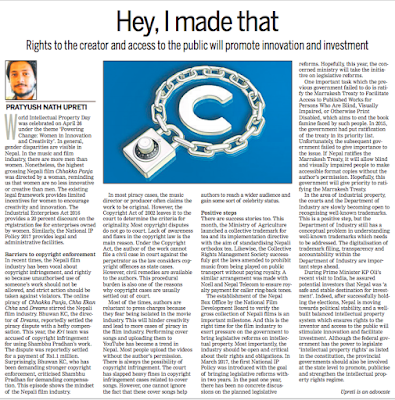 There are success stories too. This month, the Ministry of Agriculture launched a collective trademark for tea and its implementation directive with the aim of standardising Nepali orthodox tea. Likewise, the Collective Rights Management Society successfuly got the laws amended to prohibit music from being played on public transport without paying royalty. A similar arrangement was made with Ncell and Nepal Telecom to ensure royalty payment for caller ring-back tones.

The establishment of the Nepal Box Office by the National Film Development Board to verify the gross collection of Nepali films is an important milestone. And this is the right time for the film industry to exert pressure on the government to bring legislative reforms on intellectual property. Most importantly, the industry should be open and critical about their rights and obligations. In March 2017, the first National IP Policy was introduced with the goal of bringing legislative reforms within two years. In the past one year, there has been no concrete discussions on the planned legislative reforms. Hopefully, this year, the concerned ministry will take the initiative on legislative reforms.

During Prime Minister KP Oli’s recent visit to India, he assured potential investors that Nepal was ‘a safe and stable destination for investment’. Indeed, after successfully holding the elections, Nepal is moving towards political stability, and a well-built balanced intellectual property system which ensures rights to the inventor and access to the public will stimulate innovation and facilitate investment. Although the federal government has the power to legislate ‘intellectual property rights’ as listed in the constitution, the provincial governments should also be involved at the state level to promote, publicise and strengthen the intellectual property rights regime.

By Pratyush Nath Upreti May 24, 2014
Pratyush Nath Upreti In a welfare state, citizens have access to electricity, water, roads, education and health. Since citizens pay for these amenities through taxes, they expect services from the state in times of need. Increasingly, with the ubiquity of the internet, access to the web is also being considered a right. Although this scenario does not exist in the Nepali context, considering the potential of the internet to bring changes to societies and economies, the question of internet access as a basic right could bear merit. As per a World Bank report, there were 499,000 internet users in Nepal in 2008. These numbers have certainly increased. According to the Nepal Telecom authority, internet penetration had reached 28.92 percent in Nepal as of November 2013. However, along with the spread of the internet, a new avenue for crime has also evolved. A worldwide nuisance already, cybercrimes in Nepal are rising as the Internet becomes more commonplace. The Nepal Police’s Crime
Post a Comment
Read more