Editorial: The Belt and Road Initiative at the Cross Roads 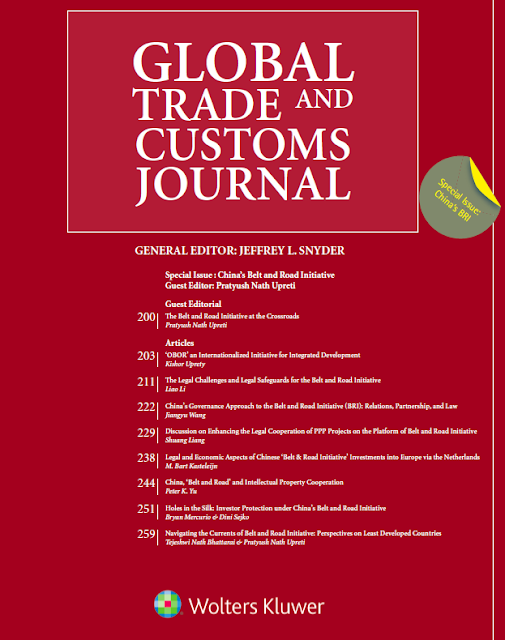 This special Issue of the Global Trade and Customs Journal showcases a wide range of scholarly contributions to one of the most ambitious projects of the twenty-first century. In 2013, the Chinese Government launched the One Belt One Road Initiative (OBOR), now referred to as the Belt and Road Initiative (BRI); a highly ambitious infrastructure project that aims to link China physically and financially to Asia, Europe, Africa, and Oceania. It covers 30% of global gross domestic product (GDP), 62% of the population, and 75% of known energy reserves, offering a trading route, which has a potential to be the world’s largest platform for regional collaboration. It has opened a new market to China and certainly spurs the economy in general. The initiative aims to establish and develop trading partners for the future through connectivity and infrastructure, where trade continues to be a driving force. Many countries have shown interest in joining the initiative because it will strengthen their financial capacity and connections with China and other regions. It is also true that the importance of the initiative is not only from a trade or an investment point of view, but also from the foreign and economic policy perspective: it is of geopolitical interest.

Link to the editorial: Pratyush Nath Upreti,'The Belt and Road Initiative at the Cross Roads' (2019) 14(5)

By Pratyush Nath Upreti June 01, 2018
IP License as an Investment: Insights from Bridgestone v.Panama Please find full article here: ABSTRACT The relationship between intellectual property (IP)and investment is old, but the debates are new. Recent high profile cases in which intellectual property rights(IPRs) are being sought to be protected by means of international investment law and treaties have generated visible debate and discussion. In the light of the recent decision on expedited objections in Bridgestone Licensing v. Republic of Panama, this article will explore arguments put forwarded by both parties regarding the interaction between IP Licence Agreements and the definition of investment, as well as the Tribunal’s finding on the question whether an IP Licence with a revenue sharing model qualifies as an investment. Citation: Pratyush Nath Upreti, IP License as an Investment: Insights from Bridgestone v.Panama (2018)1(1) Stockholm Intellectual Property Review 16 full text of the article is available h
Post a Comment
Read more

By Pratyush Nath Upreti February 16, 2015
Pratyush Nath Upreti Speaking at a memorial service for Nelson Mandela on Dec 10, 2013, South African President Jacob Zuma said, “There is no one like Madiba. He was one of a kind.” Indeed the South African president’s statement about the world’s greatest liberator who contributed so much to strengthening the values of human rights is very significant. Mandela is an inspiration for all mankind. Unfortunately, a controversy has arisen over the ownership and unauthorised use of the name Mandela since his death. Nelson Mandela’s image, name and quotations have been registered under the proprietorship of the Nelson Mandela Foundation as per South African trademark laws. They are registered under several classes including jewellery, clothing, books and other products. Furthermore, other proprietors of the Mandela brand include the Nelson Mandela Children’s Hospital Trust, Nelson Mandela Metropolitan University and the Nelson Mandela Children’s Fund. Infringement and unauthorised use of
2 comments
Read more
By Pratyush Nath Upreti February 19, 2015
At The Office for Harmonization in the Internal Market (OHIM) of European Union, Alicante, Spain, 2015
Post a Comment
Read more